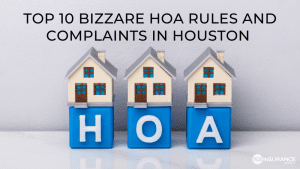 Most people value their homeowners association for maintaining well-kept neighborhoods and all the amenities included. But some would agree that their HOA might be too involved with some of the neighborhood rules. From which renovations you’re allowed to have done to the type of mulch you put in your flower beds, here is a list of stories from Houston residents who had an encounter with their overly strict HOA board members.

Your neighborhood HOA is there to keep your community looking beautiful and enforce rules so everyone in the neighborhood is happy and held to the same standard. However, it’s clear from the stories above some HOA boards can be a bit too involved. While we can’t do much about your HOA board, we can help you find homeowners insurance with unbeatable coverage at an amazing price! Contact an agent from the TGS Insurance team and get your hassle-free quote today.