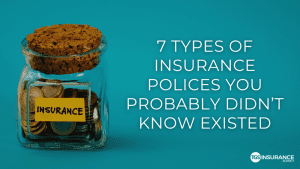 Familiar policies such as auto, home, and flood insurance are there to protect you against the unexpected, but do they protect you from every curve ball life might throw at you?

Have you ever thought about if you moved into a home that is infested with ghosts? I bet your homeowner’s insurance policy doesn’t cover paranormal activity. What if you made someone laugh so hard that they died? What would you do if you were abducted by aliens?

Shockingly enough, there is an insurance policy for each of these rare situations. Take a closer look at some unique yet strange insurance policies that actually exist.

As discussed in Top 10 Weirdest Insurance Claims and Policies, the Royal Falcon Hotel in the U.K is known for its haunting presence. The 500-year-old building was once an all-girls school and is supposedly haunted by a monk who hanged himself after being caught having an affair with one of the teachers.

Terry Meggs, the landlord of the hotel, didn’t believe in ghosts until he saw objects moving with his own two eyes and thought he should invest in paranormal insurance to protect his guests and employees. According to BBC, the insurance company paid out $100,000 on a policy after a U.S. woman died from paranormal activity.

If you ever find yourself having a close encounter with an alien or UFO, then you might be able to purchase an insurance policy protecting you from an alien abduction.

It seems to be the new trend for a U.K. insurance company, where they have sold over 30,000 policies across the continent. To be fully compensated for your damages, you must show proof that you were abducted by aliens and taken aboard a UFO.

According to a survey by The Knot, in 2019 the average wedding in Texas cost about $30,200. That’s a lot of money to gamble if the bride or groom decides to suddenly back out.

According to the Fantasy Sports & Gaming Association, there are more than 60 million members in the United States and Canada. With the average player spending $556 in league-related costs, the market for fantasy sports has drastically become more popular.

If you’re a fantasy football player, have you ever drafted one of the best players just for him to get injured and sit out the rest for the season? Well, there is a solution for any players lost, you can now purchase fantasy athlete insurance. Some insurance companies protect all-star players in football, baseball, basketball, and ice hockey. If your player is out for a certain number of games or is out for the rest of the season, you can now be reimbursed for your full league entry fee.

Insurance Against Death by Laughter

Imagine being so funny that your jokes and impressions actually caused someone to die due to laughter. Comedians who are confident enough that their comical material might kill someone can purchase death by laughter insurance. This unique type of liability insurance is crafted to protect comedians and anyone else who could potentially kill someone by their wit and sarcasm alone. It is no secret that comedians perform better with the feedback of laughter, but there is always a small possibility that their content could do more damage than good.

Celebrities, athletes, and entertainers get paid big time for what they do best, so it’s not out of the ordinary that they would want to insure the iconic assets that make them who they are. Supermodel, Heidi Klum, has her legs insured for more than $2.2 million and Bruce Springsteen has his vocal cords insured for a shocking $6 million. If you are curious to find out more celebrities who have their body parts insured, then read more here, you’re in for a shocking surprise!

Though this isn’t as weird as the others, it’s not a commonly known type of insurance. Food trucks have become a new trend for chefs across the country. Owners need to financially care for their traveling establishments from property damage, auto liability, and other potential risks like food poisoning, therefore food truck insurance is needed. Also, something to remember is some cities require comprehensive coverage to be granted city permits. Reputable insurance companies and niche providers can provide this particular type of insurance.

No matter what bizarre situations life may throw your way, there likely is an insurance policy out there to protect you. At TGS Insurance, we can’t protect you from ghosts or aliens but we can provide you protection for common insurance policies like auto and home.